Start a Wiki
Doctor Albert W. Wily is the main antagonist of the classic Mega Man series. He is an incredibly talented scientist and robotics engineer and was once the close friend and partner of Dr. Thomas Light. Whilst they worked at the University of Robotics, the two scientists discussed the possibilities of creating robots with "souls", machines capable of independent thought and action and able to feel emotions. While the two scientists managed to realise this vision and continued to revolutionize robotic technology in the years since leaving the University, their friendship became strained. Wily became aggitated when Light recieved most of the praise for their joint efforts and the disgruntled doctor decided to set out and make it on his own. After doing so, he began taking military contracts and conducted a number of dangerous, immoral experiments. These events would stain the doctor's reputation and all the while Thomas Light would achieve glory and recognition for his accomplishments. As Wily's jealousy of Dr. Light grew, he became increasingly resentful of the human race as a whole. His envy of Light and his pride in his own genius consumed him, and he became convinced that robots were inherently superior to human beings. After Dr. Light had unveiled his new Robot Masters to the public, Wily broke into Light's laboratory and stole the robots, reprogramming them to serve him and help him realize his new goal: world domination.

Dr. Wily declared himself the only true friend of robots and pledged that he would create a world where robots would rule over humans. Standing in the way of his conquest, however, was Dr. Light and his new combat robot Mega Man. Time and time again, Wily has concocted various diabolical schemes and built hundreds of robots to destroy the Blue Bomber and conquer the world, but has met with failure every single time. His resolve has never weakened, even after so many defeats, and he has always continued to plague Mega Man with new Robot Masters and deadly weapons with which to destroy his foe and mark his place in history as the world's greatest scientist.

Prior to the start of the Mega Man X series, Dr. Wily had created a revolutionary new robot warrior: Zero. Zero was designed to outmatch Mega Man in every way, but unfortunately the doctor had trouble keeping his new creation under control. He sealed Zero within a diagnostic capsule and had intended to release him when he was sure it was safe to do so. However, Wily disappeared - supposedly died - before Zero was ready to be woken.

In the Mega Man X5 video game, there are many hints that indicate that Dr. Wily has played a key role in the game's events. Whether or not the doctor was truly alive during this time is unknown since he never made an on-screen appearance (except in one of Zero's memory flashes). If he was alive, one has to wonder how since the X series is set well over 100 years ahead of the Classic series. 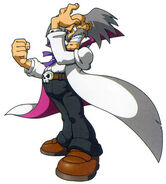 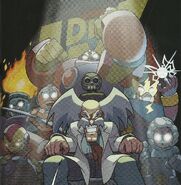 Add a photo to this gallery
Retrieved from "https://robotsupremacy.fandom.com/wiki/Dr._Wily?oldid=11722"
Community content is available under CC-BY-SA unless otherwise noted.