In H.G. Wells's classic sci-fi story The War of the Worlds, the Earth is invaded by visitors from the planet Mars. They lay waste to the human population using monstrous three-legged fighting machines that tower over trees and buildings, killing everyone in their path with devastating weapons. The human weapons of the 19th century are all but useless against the Martians' superior technology, and for every million human deaths only one Martian tripod may fall. In the book, the Martian war machines were equipped with tentacle-like appendages for grabbing and throwing objects or people. They were also armed with heat-ray weapons and large guns that could launch capsules that released a deadly black smoke that would immediately kill anyone who inhaled it. Over the years since the book was first published, numerous artists have created their own impressions of what Martian fighting machines look like. In the 2005 War Of The Worlds film directed by Steven Spielberg, the tripods had a much more bio-mechanical aspect to them, with flexible legs capable of more fluid motions. The movie tripods also had energy shields that made them impervious to all of man's weaponry, unlike Wells' original concepts which could be destroyed by human weapons.

The Martian tripods have been envisioned in a number of different designs.

An older impression of a fighting machine 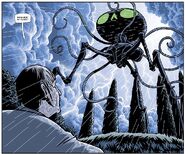 Tripods from the 2010 WotW video game

A model of a tripod from Steven Spielberg's 2005 WotW film