Start a Wiki
Mega Man X is the last creation of Dr. Thomas Light, the Father of Modern Robotics in the classic Mega Man series. He is the main character of the sequel series Mega Man X and possesses abilities similar and superior to his predecessor, the original Mega Man.

In the late 20XX period, the fighting robot known as Mega Man disappeared under mysterious circumstances. Though the world was at peace, Dr. Light was certain that the time would come again when the world would be in need of a new hero. With his vision of a world where robots and humans stood united as brothers still yet to be realised, Light poured all of his knowledge and skill into his greatest - and last - creation: Mega Man X.

X was intended to be the pinnacle of robot development, a truly sentient creation capable of independent thought and emotion and the ability to choose his own path in life. Nevertheless, Dr. Light installed advanced combat capabilities within X, hoping that he would decide to protect the world and help achieve the doctor's dream. Light also knew that the world was not yet ready for the raw potential and power that X represented and feared that his final creation may possibly be a danger to humanity if released into the world before the correct time. With these concerns in mind, the doctor sealed X away inside a diagnostic capsule that would run a constant series of tests on X's systems. The suspension period would need to run consistently for at least 30 years in order to guarantee X's stability. After sealing X within the capsule, Dr. Light spent his final days installing various hidden capsules around the world that contained armour modifications designed for X, which he could use in the event that the world was again suffering conflict between robots and humans.

X would be activated in the latter half of the 21XX period after almost a century since his encapsulation. He was awakened by an exobiologist called Dr. Timothy Cain, who had stumbled upon Dr. Light's old laboratory accidentally whilst studying new forms of plant life. While not a robotics specialist, Cain recognised X's potential and introduced the robot to the world. Despite his "age", X's technology and sophisticated programming were still cutting edge and his discovery would lead to the creation of an entirely new generation of robot: the Reploid.

Although X's discovery was meant to usher in a new era of prosperity for humanity and robots alike, Dr. Cain duplicated Dr. Light's work without fully understanding it. This would lead to the emergence of "Mavericks", rogue Reploids that defied the Laws of Robotics and commited acts of violence against humans. Dr. Cain established a Reploid peacekeeping organisation known as the Maverick Hunters to surpress Maverick activity. X himself joined the Maverick Hunters and became leader of its 17th Unit, however, he displayed a strong hesitation towards fighting. He questioned the reasoning for his free will and his disdain for violence, wondering why he possessed such things when he was clearly built for combat, and these questions would remain with him throughout his life.

Maverick activity would escalate when the Maverick Hunters' leader Sigma would go Maverick himself, taking command of most of the Maverick Reploids and leading a revolution against humanity. Thus the Maverick Wars began and so X dedicated himself to fighting for peace and to bring an end to Sigma's madness. Along with his friend and fellow Hunter Zero, X led the charge against Sigma and many other Maverick insurgents that arose over the following years.

The Maverick Wars would eventually be brought to a close after decades of fighting. Following the conclusion of the conflict, Cyber-elf scientist Dr. Weil proposed the development of a project to make a "ruler" for Reploid kind, a Reploid capable of re-writing Reploid abilities and preventing the possibility of future Maverick outbreaks. X opposed the project, believing that it was still entirely possible for humans and Reploids to peacefully co-exist. As a result, Weil altered the Mother Elf, turning her into the Dark Elf, and stole Zero's original body to create Omega, starting the "Elf Wars". Zero's "mind and soul" were placed into a new body, and he fought alongside X to defeat Omega. For the damages Omega and Weil had caused, Weil was modified into a cyborg and banished into the wasteland and Omega was sentenced to perpetual exile in Earth's orbit. After this war, Zero sealed himself again, and X founded Neo Arcadia.

X became the leader of Neo Arcadia, overseeing the welfare of both humans and Reploids for an undisclosed long period of time. However, the tolls of the endless wars he faced and fighting his enemies alone slowly corrupted his heart, and realized he no longer cared about the Mavericks he killed. Weary of his long life as well as fearing that he will eventually lose himself and become worse than the enemies he faced, X retired and abandoned his body to be used as a seal for the Dark Elf. His mind however continued to exist independently as a cyber elf. However, he wasn't able to fully convert himself into a cyber elf, possiblly due to his 'Limitless Potential", and therefore his power 'split' into four others that became Sage Harpuia, Fighting Fefnir, Fairy Leviathan, and Hidden Phantom. Due to his disappearence, a young genius named Ciel created a copy version of him to fulfill the role of the leader of Neo Arcadia.

It is assumed that X is the one to have provided Ciel with the coordinates to Zero, when X saw Ciel create a resistence of Neo Arcadia to battle his copy. It is unknown how, but X was in possession of Zero's Z-Saber, despite being a cyber elf.

The creation of Copy X and his supplement of the original's leadership over Neo Arcadia proved to be a grave error. The copy came to view all Reploids as a threat to humanity and began a campaign of genocide against them. The true X, in his cyber-elf form, worked towards reviving his long-lost friend Zero, his activities going unnoticed by either Neo Arcadia or the Resistance movement. Through his actions, the Resistance were able to discover Zero's resting place and they were able to revive him, recruiting him into their ranks. Over the next few years, X would aid Zero in his mission against Neo Arcadia by offering him advice and wisdom throughout his battles. He would make the final sacrifice by assisting Zero in destroying Omega, which resulted in him expending the last of his energy and the death of his cyber-elf form.

X exists as a Cyber-Elf in the Zero series and is supposedly incapable of physically interacting with the world. He does regularly communicate with Zero and can affect certain machines, but this uses energy which he cannot replenish, making his cyber-elf form significantly finite compared to his physical Reploid form. 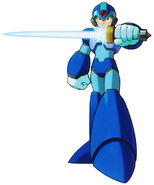 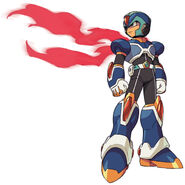 Add a photo to this gallery
Retrieved from "https://robotsupremacy.fandom.com/wiki/X?oldid=11665"
Community content is available under CC-BY-SA unless otherwise noted.